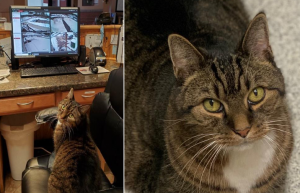 Norman joined the REVH family in March of 2010, and quickly took over everything. He saved many feline patient lives by donating blood, until he retired from blood-donating in 2017 and assumed his current role of His Royal Majesty. Norman now spends his extensive free time judging, eating treats, sleeping in his bay window, and chasing toy mousies. He prefers to drink cold water fresh from the bubbler, served in a cup. Norman does not condescend to drink from bowls. 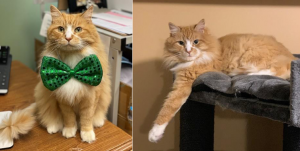 Teddy joined the REVH family in December of 2012. Teddy also saved many lives by donating blood, until he also retired from donating in 2018. Teddy now spends his days lounging and screaming for treats. Mostly he just looks adorable and loves to cuddle, so his job title might also be “therapist”. 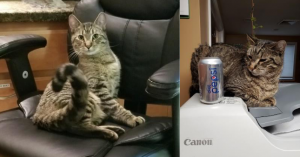 Leonard joined the REVH family in July of 2018, when he was just a kitten. He had been hit by a car and required extensive surgery to save his life. Due to some long-term damage related to his trauma, he was given a reprieve from blood donation and instead assumed the job of freeloader. Leonard spends his days chewing on everything he can find, stealing food from employee bags, biting through soda cans, and generally being a pain. On stressful days, however, Leonard provides much-needed laughter and distraction.

In December 2020 Leonard developed a ureter obstruction and nearly died of kidney failure. He underwent a procedure at Tufts University called a SUB placement to bypass his blocked ureter, and thanks to Tufts our freeloading troublemaker is back to wreaking havoc. 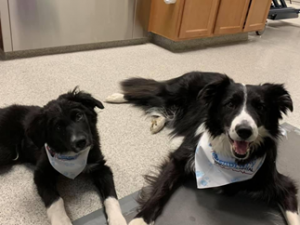 Maverick (owned by Amy, right) joined REVH in 2010 at just 9 weeks old and grew up there working along side his mom. He quickly learned to the ropes of how to be a technicians companion and well behaved hospital dog. He has saved many lives by donating blood. Since he retired from being a blood donor in 2019 he decided to volunteer his time as the staffs’ emotional support dog by giving hugs to the staff and always bringing a smile or laugh to the workers during stressful times. Sometimes he even refuses to leave his shift if he doesn’t think the staff is ready to be without him.

When he isn’t working he likes to spend his days hiking with his mom and brother Finnley, herding his horses or playing fetch with anyone interested in tossing a toy for him.

Finnley (owned by Amy, left) joined revh in sept 2020 at just 8 weeks old and quickly learned from his big brother Maverick how to love up to all the team members. He spends his shifts happily greeting the staff and making sure everyone starts and ends their shifts with a wet nose kiss. Some mornings if shift change isn’t to hectic he gets everyone’s morning started with a game of toss his toys in the doctor’s office. When the hospital is busy you can hear him squeaking his toys from his comfy kennel always making the staff laugh.

He has hopes to be a blood donor in the future.

When Finnley isn’t offering support to the team. He enjoys running in circles trying to get any of his canine friends to chase him, hiking with his mom and brother maverick and eating snow.